“What I think is that the American people understand that not everybody has been following the rules; that Wall Street is an example of that; that folks who are working hard every single day, getting up, going to the job, loyal to their companies, that that used to be the essence of the American Dream. That’s how you got ahead — the old-fashioned way. And these days, a lot of folks who are doing the right thing aren’t rewarded, and a lot of folks who aren’t doing the right thing are rewarded.“–President Barack Obama on the Occupy Wall Street protests being held across the country. 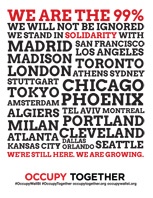